Dear careful, cautious, money-saving people who blow off opportunities to go somewhere, decide to miss great events and choose instead to just stay home — this letter is for you:

For much of my life, I have turned down, ignored or gotten out of invitations to gatherings and events. Usually, I just stay home. There are various reasons for this. I have missed so many gatherings and events in my 53 years of living, I have had to come up with gobs of logical reasons so that I could stay home and actually feel good about it; i.e., I really don’t have the time. I’ll get to get dressed, and I really don’t feel like it. I am pooped. Not having something to wear has never been one of them because I have a gajillion clothes. Of course, none of these are really reasons. They are excuses. And what is the easiest and best-used excuse?

Almost every single time without exception, I can use the excuse of saving money and turn it into a legitimate reason for staying behind on the couch. If I can’t think of another believable reason, I can always go to the tired-and-true, drop-back of saving money. Truly, going places and participating in actual events does cost money. Some cost more than others. One of the most recent examples for me was the Gator Bowl game in Jacksonville between my alma mater, the Florida Gators, and those dratted Ohio State Buckeyes, who have recently hired our former coach, the notorious ‘Urban Liar.’ Going to the game on January 2, 2011, would not be cheap. Sitting in the Club would cost me $125 per ticket. Since I would not be attending alone, that would set me back $250. Good grief! If ever I could easily use this reason, this was it. I agonized for days succumbing to the understanding that I really and truly wanted to go. Even after I made up my mind, the stay-at-home, save-money side of my schizophrenic self kept nagging me about what a foolish move I was making. Nonetheless, I hung onto my resolve until the dollars were taken from me via my credit card. Thus, I had no choice but to go. Too late to stay at home and save money. If I stayed home now, I would be wasting money already spent. That would vault me into a state of unacceptable foolishness even I could not abide.

The truth is that there really are reasons that prevent me and people like me from going places and doing things. They have nothing to do with the aforementioned excuse. It usually always involves fear or lack of hope. If I go to a party, nobody will want to talk to me, and I will be embarrassed and stuck in a miserable situation. If I go to a concert, I won’t be able to figure out where to park, and I’ll drive around endlessly and perhaps be forced to park illegally and far away. That could result in a parking ticket and a possible mugging since I have zero sense of direction and would probably walk in the wrong direction toward a bad area nowhere close to the location of the concert. The problem with living my life this way is that, after years of staying home, I forget what it’s like actually to go places and do things and be there at real events. So, it just begins to make sense always to stay home and save money. The problem is that a third reality almost always follows staying home and saving money and pretending you’re not scared. It’s called missing life. The Gator Bowl game is a perfect example. I invited my 28-year-old son, Ryan, who graciously accepted. We didn’t worry about where we would park. We just drove downtown and enjoyed the simple adventure of parking and walking toward the stadium with all the other people who were doing the same thing. In spite of the fact that many of them were wearing Buckeye jerseys and would soon be coached by Urban Liar, even the walk there was fun. It was a pleasure, and the fun just continued the whole time. I had a blast. Days like that with my son don’t happen as often as they used to and will probably happen even less in the years ahead. The Gators won. We all know that doesn’t happen as much as it used to. Personally, I am tired of missing life. I know I can’t go everywhere to everything and that there are going to be sometimes when I truly just don’t want to. But I have learned that going to places and gatherings that might scare me a little bit isn’t as scary as the alternative. Missing life is a whole lot worse. 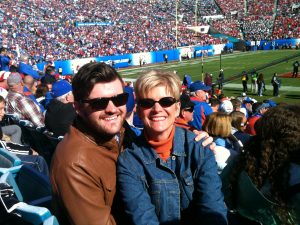